During my PhD I worked on a couple of interesting projects related to machine translation. In this page I plan to talk about two of them: one which introduced the idea of contextual parameter generation (CPG) and one which proposes a novel framework for curriculum learning and applies it to the problem of machine translation. The following post is currently about the first project, but it will soon be updated with information about the second.

Figure 1: Overview of the contextual parameter generator that is introduced in this post. The top part of the figure shows a typical neural machine translation system (consisting of an encoder and a decoder network). The bottom part, shown in red, shows our parameter generator component.

NMT systems typically consist of two main components: the encoder and the decoder. The encoder takes as input the source language sentence and generates some latent representation for it (e.g., a fixed-size vector). The decoder then takes that latent representation as input and generates a sentence in the target language. The sentence generation is often done in an autoregressive manner (i.e., words are generated one-by-one in a left-to-right manner).

It is easy to see how this kind of architecture can be used to translate from a single source language to a single target language. However, translating between arbitrary pairs of languages is not as simple. This problem is referred to as multilingual machine translation, and it is the problem we tackle. Currently, there exist three approaches for multilingual NMT.

Assuming that we have \(L\) languages and \(P\) trainable parameters per NMT model (these could be, for example, the weights and biases of a recurrent neural network) that translates from a single source language to a single target language, we have:
At EMNLP 2018, we introduced the contextual parameter generator (CPG), a new way to share information across different languages that generalizes the above three approaches, while mitigating their issues and allowing explicit control over the amount of sharing.

Let us denote the source language for a given sentence pair by \(\ell_s\) and the target language by \(\ell_t\). When using the contextual parameter generator, the parameters of the encoder are defined as \(\theta^{(enc)}\triangleq g^{(enc)}({\bf l}_s)\), for some function \(g^{(enc)}\), where \({\bf l}_s\) denotes a language embedding for the source language \(\ell_s\). Similarly, the parameters of the decoder are defined as \(\theta^{(dec)}\triangleq g^{(dec)}({\bf l}_t)\) for some function \(g^{(dec)}\), where \({\bf l}_t\) denotes a language embedding for the target language \(\ell_t\). Our general formulation does not impose any constraints on the functional form of \(g^{(enc)}\) and \(g^{(dec)}\). In this case, you can think of the source language, \(\ell_s\), as a context for the encoder. The parameters of the encoder depend on its context, but its architecture is common across all contexts. We can make a similar argument for the decoder, and that is where the name of this parameter generator comes from. We can even go a step further and have a parameter generator that defines \(\theta^{(enc)}\triangleq g^{(enc)}({\bf l}_s, {\bf l}_t)\) and \(\theta^{(dec)}\triangleq g^{(dec)}({\bf l}_s, {\bf l}_t)\), thus coupling the encoding and decoding stages for a given language pair. This would make the model more expressive and could thus work better in cases where large amounts of training data are available. In our experiments we stick to the previous, decoupled, form, because it has the potential to lead to a common representation among languages, also known as an interlingua. An overview diagram of how the contextual parameter generator fits in the architecture of NMT models is shown in Figure 1 in the beginning of this post.
Concretely, because the encoding and decoding stages are decoupled, the encoder is not aware of the target language while generating it, and so, we can take an encoded intermediate representation of a sentence and translate it to any target language. This is because the intermediate representation is independent of any target language. This makes for a stronger argument that the intermediate representation produced by our encoder could be approaching a universal interlingua, more so than methods that are aware of the target language when they perform encoding.

The contextual parameter generator is a generalization of previous approaches for multilingual NMT:

The parameter generator also enables semi-supervised learning. Monolingual data can be used to train the shared encoder/decoder networks to translate a sentence from some language to itself (similar to the idea of auto-encoders). This is possible and can help learning because many of the learnable parameters are shared across languages.
Furthermore, zero-shot translation, where the model translates between language pairs for which it has seen no explicit training data, is also possible. This is because the same per-language parameters are used to translate to and from a given language, irrespective of the language at the other end. Therefore, as long as we train our model using some language pairs that involve a given language, it is possible to learn to translate in any direction involving that language.

Let us assume that we have trained a model using data for some set of languages, \(\ell_1, \ell_2, \dots, \ell_m\). If we obtain data for some new language \(\ell_n\), we do not have to retrain the whole model from scratch. In fact, we can fix the parameters that are shared across all languages and only learn the embedding for the new language (along with the relevant word embeddings if not using a shared vocabulary). Assuming that we had a sufficient number of languages in the beginning, this may allow us to obtain reasonable translation performance for the new language, with a minimal amount of training (due to the small number of parameters that need to be learned in this case --- to put this into perspective, in most of our experiments we used language embeddings of size 8).

We present results from experiments on two datasets in our paper, but here we highlight some of the most interesting ones. In the following table we compare CPG to using the pairwise NMT models approach, as well as the universal one (using Google's multilingual NMT system). Below are results for the IWSLT-15 dataset, a commonly used small dataset in NMT community.
The numbers shown in this table represent BLEU scores, the most widely used metric for evaluating MT systems. They represent a measure of precision over \(n\)-grams. More specifically, in this instance they represent a measure of how frequently the MT prediction outputs 4 consecutive words that match 4 consecutive words in the reference translation.
We show similar results for the IWSLT-17 dataset (commonly used challenge dataset for multilingual NMT systems that includes a zero-shot setting) in our paper, where CPG outperforms both the pairwise approach and the universal approach (i.e., Google's system). Most interestingly, we computed the cosine distance between all pairs of language embeddings learned by CPG: 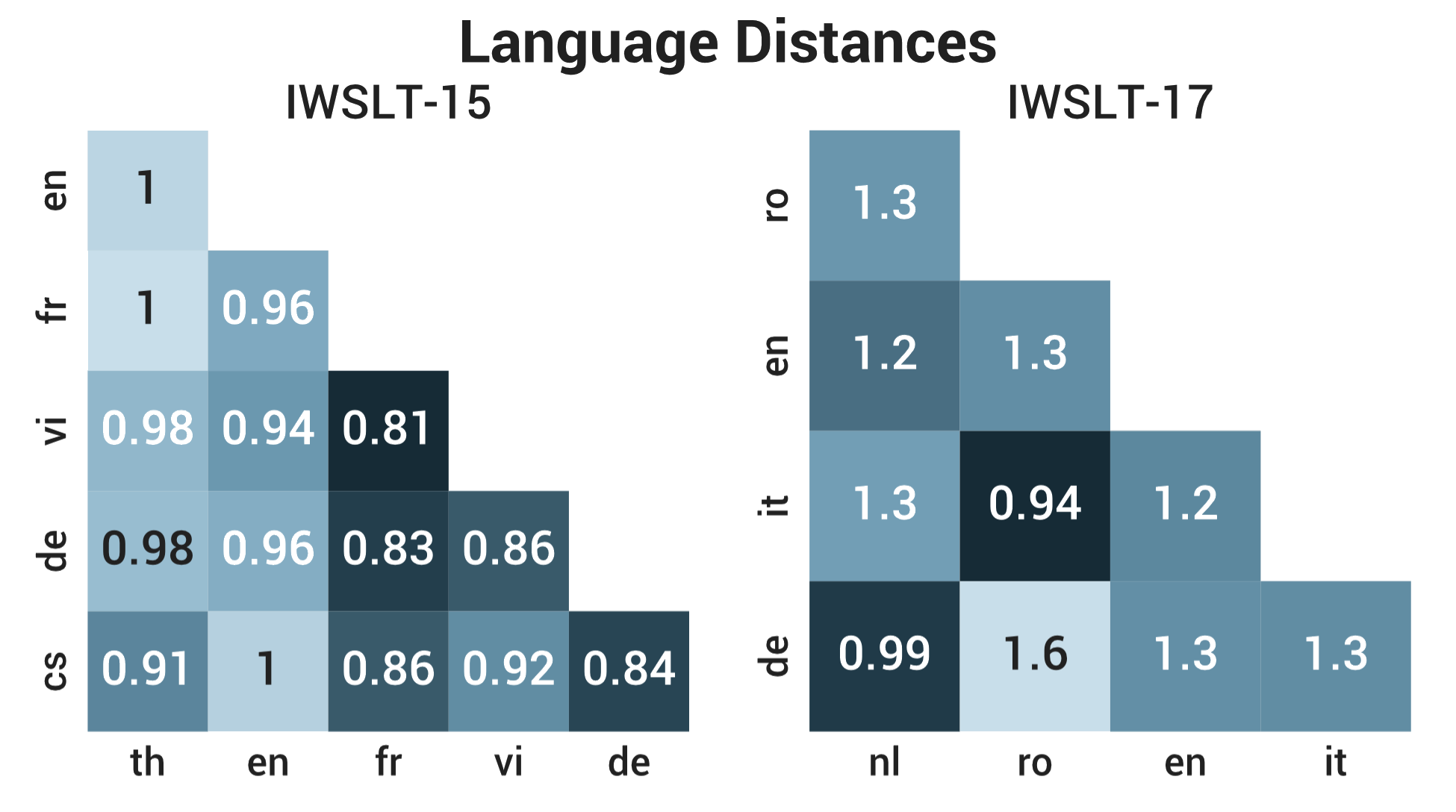 Figure 6: Cosine distance between all pairs of the language embeddings learned using our contextual parameter generator. Note that the cosine distance values can range between 0 and 2.

There are some interesting patterns that indicate that the learned language embeddings are reasonable. For example, we observe that German (De) and Dutch (Nl) are most similar for the IWSLT-17 dataset, with Italian (It) and Romanian (Ro) coming second. Furthermore, Romanian and German are the furthest apart for that dataset. It is very encouraging to see that these relationships agree with linguistic knowledge about these languages and the families they belong to. We see similar patterns in the IWSLT-15 results but we focus on IWSLT-17 here, because it is a larger, better quality dataset with more supervised language pairs. These results also uncover relationships between languages that may have been previously unknown. For example, perhaps surprisingly, French (Fr) and Vietnamese (Vi) appear to be significantly related for the IWSLT-15 dataset results. This is likely due to French influence in Vietnamese due to the occupation of Vietnam by France during the 19th and 20th centuries.

Where should you look to learn more?

More details can be found in our EMNLP 2018 paper. We have also released an implementation of our approach and experiments as part of a new Scala framework for machine translation. It is built on top of TensorFlow Scala and follows a modular NMT design that supports various NMT models, including our baselines. It also contains data loading and preprocessing pipelines that support multiple datasets and languages, and is more efficient than other packages (e.g., tf-nmt). Furthermore, the framework supports various vocabularies, among which we provide a new implementation for the byte-pair encoding (BPE) algorithm that is 2 to 3 orders of magnitude faster than the released one.
I also plan to release another blog post later on in 2019 with some follow-up work we have done on applying contextual parameter generation to other problems.

We would like to thank Otilia Stretcu, Abulhair Saparov, and Maruan Al-Shedivat for the useful feedback they provided in early versions of this paper. This research was supported in part by AFOSR under grant FA95501710218.